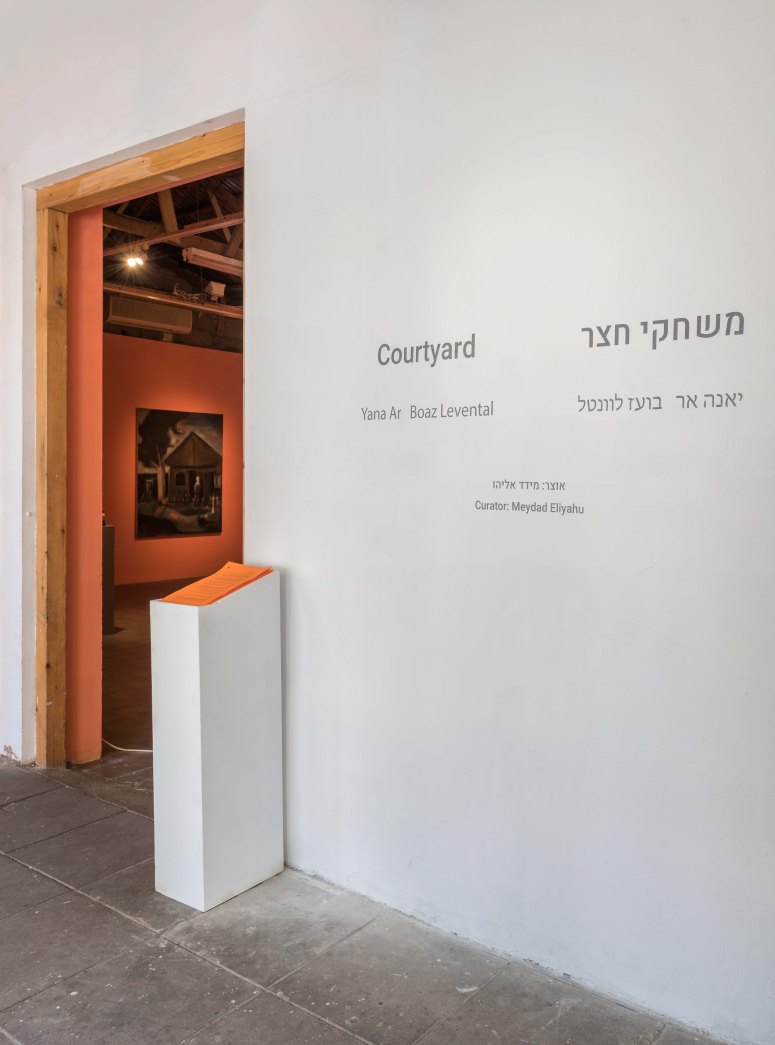 On Barbur Gallery’s website, a poster for the Courtyard exhibition contains two works by the featured artists: Boaz Levental and Yana Ar. Levental’s work depicts a fuzzy scene. A human figure, distinguishable by a white and light-gray upper body, stands in a doorway. A few dabs of red, yellow, and green suggest some objects, maybe even life. The outside of a home seems to appear as it simultaneously recedes. Beside it, Ar’s work presents black illustrations muted by murky but distinct layers. In the cloudiest layer, seemingly farthest from the viewer, thin lines form a structure—perhaps a wall. Beneath its own cloudy layer, fat cracked strokes lay on top of this structure. Finally, more coherent strokes imitate a branch with leaves protruding from the previous, wider strokes. These two pieces introduce each artist’s style while suggesting a common world that is bleak, fuzzy, and receding.

Thanks to a simple yet risky decision, curator Meydad Eliyahu transforms the reception of these otherwise gloomy works. The walls of the Barbur Gallery are anything but neutral for this exhibition, in which Eliyahu had them painted a solid, bright orange. This orange is reminiscent of the Do It exhibitions spawned by Hans Ulrich Obrist. At its core, Do It is an expanding collection of instructions to be selected and executed as progressive exhibitions. All of the books containing the instructions for Do It, as well as many of the rooms that host these exhibitions, feature the same orange used in Courtyard. For Do It, the color choice invokes an invitational mood—an attempt to seduce the audience (and especially future organizers) of the exhibition to ‘do it’ for themselves. Even though it offers no instructions, Courtyard with its orange walls is similarly inviting: the warm walls of this exhibition solicit questions concerning the framing of gloom. Against the orange background, the colors of Levental’s works shift. What may have seemed like black against a white background becomes dark gray against orange. The dabs of bright color now seem to share more with the cheerful backdrop that lays just beyond the edge of the paintings.

The shade of Ar’s works seem less affected by this bright background than Levental’s. Her quasi-figurative lines, separated by murky layers, represent an aspect of our minds’ engaging with the world. Much of our day-to-day attention leaps as it locks on specific objects, or sections of them. While a number of other objects stand bleary, forming foggy constellations of potential points on which to focus our attention. Concerning these murky layers, which envelope the less distinct objects, their origin is ambiguous. Does our selective attention further cloud the world, or is the world a cloud from which our attention exhibits objects? As this question emerges from Ar’s work, we can experience the extent to which even a bright, inviting orange can recede. 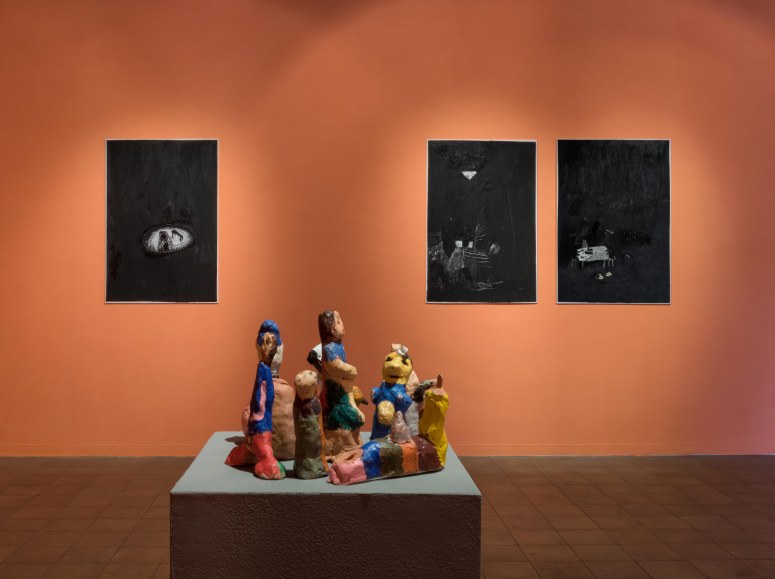 About the Author: Lonnie Monka is a freelance writer and poetry enthusiast. He is also the founder of Jerusalism, an initiative to foster local literary community in Jerusalem, where he continues to organize readings series, workshops, and social gatherings. He also enjoys posting pictures of @toiletsofjerusalem on Instagram.