In Russian, “Pravda” means truth. It is also the name of the former official newspaper of the Communist Party of the Soviet Union—and the title of acclaimed Israeli artist Zoya Cherkassky’s first solo exhibition, currently on view at the Israel Museum.

Born in Kiev, Cherkassky, 42, moved to Israel with her family in the 1990s during the massive million-strong immigration wave from the former Soviet Union. The works on display include some 20 recent, large-scale, oil paintings and numerous childhood drawings that boldly examine the collective experience of Russian immigrants to Israel. The provocative, unsettling works depict bullying, sexual harassment, and negative encounters with the religious establishment—utilizing stereotypes about both Russians and Israelis to reveal uncomfortable truths about Israeli society.

In the controversial work Itzik, for example, a tawny, hairy, Mizrachi man wearing gold jewelry and sandals gropes a helpless, blonde, Russian waitress whose tight tee shirt, reading “Falafel Itzik” in Hebrew, reveals her pale skin and cleavage. When Cherkassky, co-founder of New Barbizon, a group of female painters from the former Soviet Union, posted this image on Facebook, it sparked a heated discussion about sexual harassment and the stereotypical appearances of the painting’s subjects. This was her intention.

In another sharply honest work, The Circumcision of Uncle Yasha, a middle-aged Russian man, eyes open behind thick glasses, lies on a sterile cot as two Ultra-Orthodox men perform his circumcision. One holds a Bible over his face, seemingly oblivious to the pain and trauma his “patient” is experiencing. Although graphic and difficult to digest, the painting demonstrates the dark humor that punctuates many of Cherkassky’s works. In this case, hanging on the wall behind the three men, a poster resembling a medical illustration shows examples of before and after the procedure. This work recalls the large number of Russian immigrants who chose to be circumcised, not a common practice in the former Soviet Union, in order to integrate into Jewish Israeli society. 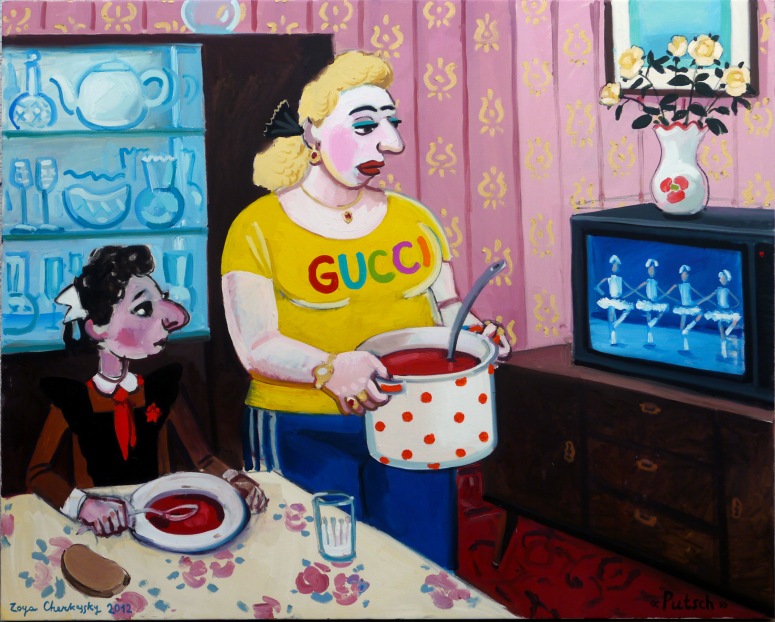 There are also several powerful diptychs in the exhibition that compare daily life in the former Soviet Union and Israel. 1991 in Ukraine is a city scene that depicts the chaos, crime, and violence that characterized the collapse of the Soviet Union. Among other uncomfortable scenes, the painting shows a man sexually exposing himself to two young girls (Cherkassky often experienced this on her way home from school), thieves stealing materials from a construction site, three men beating another man with large sticks, and two opposing groups of Ukrainian and Soviet protestors facing off in the background.

The second section of the diptych, Friday in the Projects, shows a small, poor, Israeli town also rife with conflict and lawlessness. In the work, an old man rummages through a garbage bin, presumably looking for food; two junkies shoot up in the entrance of a nondescript apartment building; a young man brazenly waves a gun in the air; and a missile falls from the sky, dangerously close to the center of town. Consumed with their own struggles, no one notices.

“For me, this painting is the key to the exhibition,” says Cherkassky, whose thoughts on her work can be heard in the exhibition’s audio guide, available in English, Hebrew, and Russian. “It depicts the two states of before and after— and both are not really good.”

Statements like these can only be made by an artist who knows her subject matter intimately. Cherkassky’s brave commitment to candidly depicting her own experiences, as well as those of other Russian immigrants to Israel, prompts viewers to examine their preconceived notions about the “other” and to critique Israeli society as a whole — hopefully in order to improve it.

Pravda, curated by Amitai Mendelsohn, is on view until October 31, 2019 at The Israel Museum.

Natalie Chetboun is a freelance writer and editor based in Jerusalem. She holds an MA from Bar Ilan University’s Shaindy Rudoff Graduate Program in Creative Writing, and her poetry and articles appear in The Jerusalem Post, The Museum of Americana, The Ilanot Review, and other publications. Also a textile artist, she chronicles her work on Instagram @nataliechetboun.